The Best House on Bramble Street by WHO? 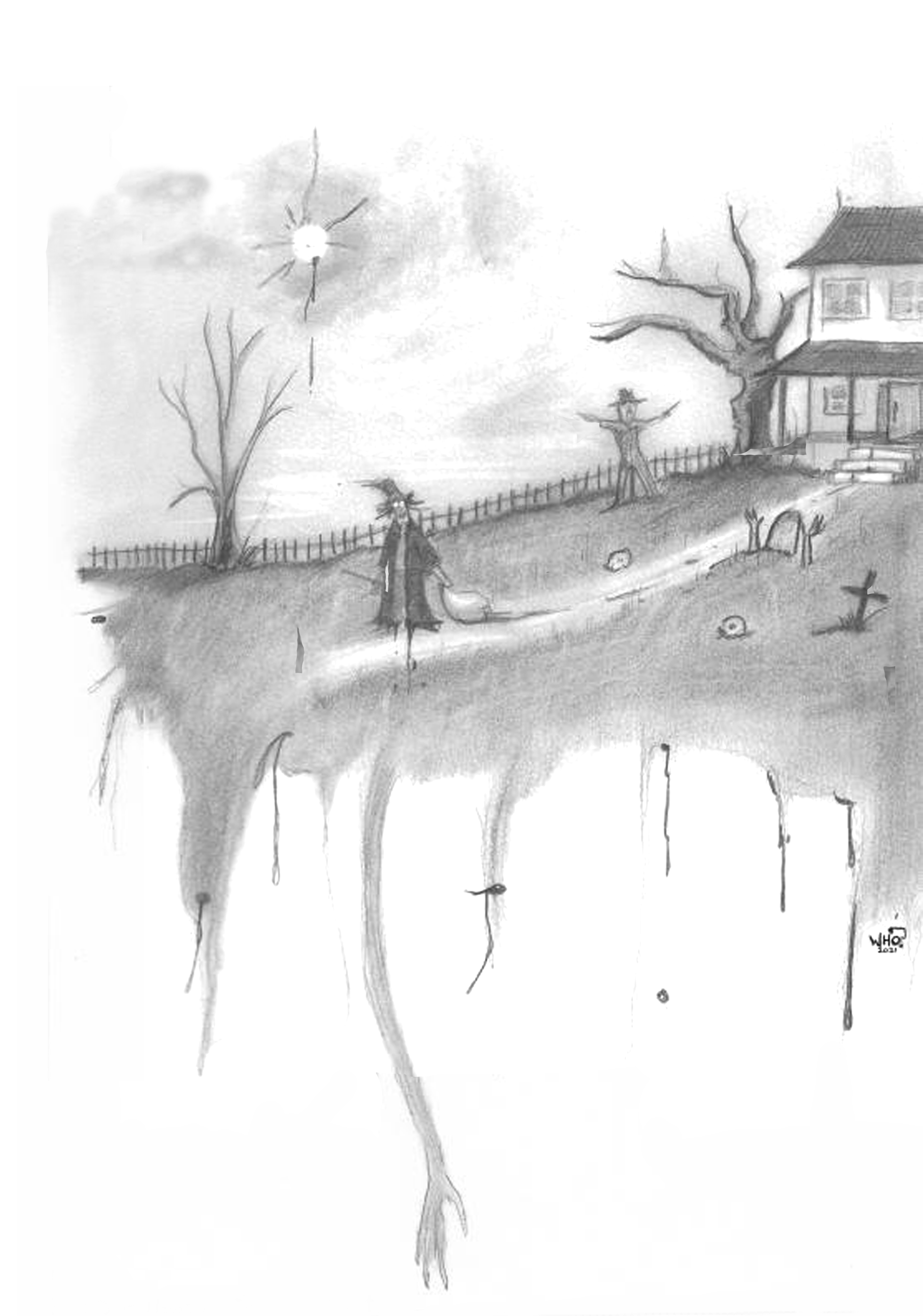 “You’re gonna be so scared, you’ll poop AND pee yourself at the same time!”   Brandon proclaimed loudly as we walked home.

And just like that, the pre-halloween hype had begun.

This is how we started every October 1st.  Brandon and his family lived across the street in an old house up a long driveway, and were known to go over-the-top during the holiday season, especially on Halloween.  His father worked in the film industry, and had all kinds of connections for props and make-up, and he took a childish glee in watching neighborhood kids endure a frightening gauntlet for a full sized candy bar. To the parents and all of us older kids, it was pure entertainment. He would make the whole family swear an oath of secrecy, and would even go so far as to decorate the house super early in the morning, the day of Halloween, so like kids on Christmas, the entire neighborhood would wake to a surprise.

“I dunno...last year was kind of lame in my opinion...” said one of the younger kids.

“Last year you were still in diapers.” said his friend.

“Guys trust me, this one is going to be THE ONE!” said Brandon.

“You say that every year.” I laughed back.

“Look … I can’t tell you everything….but what I can tell you is this: You remember my Uncle right? The one in Demolition? Well he did this job a few months back and came across some wacky stuff and gave it to my Dad. Just you wait!”  Brandon said in a hushed tone.

I walked home with him from school trying not to act impressed, when in reality, like every other kid, I was dying to know what his Dad had planned. The minute I got home, I was all over social media, connecting with different friends of mine and exchanging what info we had. Try as we might, none of us could squeeze anything out of Brandon whatsoever, so we did some research throughout the week, to help pass the time and give us something to do in this otherwise boring town. We all got together to talk and the best clues/rumors any of us could gather were these:

Richie Simmons, a well known liar,  said he “heard from a good source” that it was a bunch of stuff from an old mortician, like tools, coffins, and even a REAL body and parts…

Andy Guzman said his dad told him it was just a bunch of moldy old Vintage Halloween props that haven’t seen the light of day in years.

Matt Weber, who claimed to have done research, said all he could find was that the house belonged to an old Scandinavian art collector.

Eventually as with all things, the hype slowly died down, and other things began to catch our interest as they do when you are young, and so we just forgot all about it...until the day before Halloween...

Brandon and his younger sister Olivia didn’t show up to school that day. The kids began to talk, but no one really bothered much, as we all knew how serious his father was and figured that this year he was going all out, enlisting the help of the wife and kids too. Their cars were still at the house and a few lights were on, so no one put too much thought into it and left it at that.

Later that night after I went to bed, I was awakened by some noise outside, being the light sleeper that I am. I looked at the clock and it was almost 3 o’clock in the morning. The moon was still out, and it was foggy as I peered outside my window.  Under the cover of darkness was Brandon's dad, already half dressed in his halloween costume consisting of what looked like a  long black coat or cloak and an old stovepipe hat. I know he had some serious Hollywood make-up connections, which meant that costumes sometimes took hours to get into, so seeing him half ready wasn’t out of the norm.  He was walking awkwardly around the lawn placing things here and there with the care of a house maid, moving and re-arranging things so that they looked perfect. You don’t become known as the best house on Bramble Street without doing the job right I guessed.

I watched for what seemed like hours and thought nothing of it, until his father looked up and met my gaze. The moonlight gave his eyes a deep coal black effect with piercing beady whites which caused me to freeze in fear, speechless almost unable to breathe. He tilted his head while grinning at me, and then moved back towards the house. He couldn’t actually see me, as I was hidden behind my blinds, but I was scared stiff and shivering.

“He’s good.” I muttered to myself as I tried to go back to sleep.

The next day on Halloween,  as was the yearly ritual, all the kids and adults gawked at the house and took photos as they waited for the bus or went to work. It looked incredible! This year his father went for a classic “Graveyard” scene.  No one dared approach it, as we all wanted to wait for the big night. All day in school, we anxiously sat in our costumes waiting for the bell to ring so we could dash out and begin our trick-or-treating, with the finale of visiting Brandon's house.

After what seemed like an eternity, the final bell for the day rang, and off we went, to fill our sacks with candy. With still no sign of Brandon or his sister, we figured they would be helping with the spooky effects this year, so our group of friends minus two went out for the night. The neighborhood was lively as always and Brandon's house was already the talk of the street with people gathered out front. As we approached the house, we heard the cries of the last poor child walking away...another victim of the yearly scare. Brandon’s dad must be beside himself in laughter I thought.

The minute we stepped onto the property, the unnerving feeling that followed as we ventured up to the porch to claim our full candy bar prize was beyond weird. We began our walk up the dimly lit pathway, with a few flickering lights here and there providing just enough light without killing the mood. All down the walkway was fake blood smeared to look like someone had been dragged, and strewn about the lawn were limbs, skulls, the usual decor.  Closer to the house was a zombie reaching out of the ground, trying to break free amidst some tombstones, and a very lifelike looking scarecrow posted up in the background. We kept our eyes on it, expecting it to pop to life any minute and scare us...but it remained still. There were no crazy effects, or scary music like years past, but all of us could swear that you could see a shadowy figure looming about near the garage who always seemed to be gone when you focused. They say that humans have a sixth sense, passed down from evolution, that used to help our early mammal ancestors sense danger. Well it was something akin to that, and I wanted nothing to do with it and was happy to leave after getting my giant Snickers.

To say his father went over the top was an understatement. Prior to this, we always looked forward to Jumpscares or other typical “Haunted House” cliches but this year was the first year I was actually afraid, and I wasn’t alone either. All the other kids in our groups shared the same feeling. It was all I could think about until I fell asleep that night.

The next day at school everyone was still talking about how creepy it was visiting the house. It was also a little weird that Brandon and his sister still had not come back to school, or even come to hang out with us on the big night. But again, it was all just disregarded, since we all knew how hard they worked and must be tired. That was until the next day...

The next door neighbor ended up calling in a complaint with the police after her cat was attacked by the wild animals who were attracted by all the candy dropped by kids running in terror from the property.  So as was the procedure, the police were sent to investigate.

I’ll never forget that day for as long as I live.

Upon arriving,  they barely even stepped on the lawn before they started getting on their radios, placing calls. Then all the trucks showed up, with people in hazmat suits, carrying bags and placing all the decorations in them, as well as carefully removing the impaled creepy old scarecrow from its post .

I couldn’t believe what I was hearing. We all stood outside in disbelief as they carried bag after bag into the coroner's van.

An officer approached my family and asked us if we had seen anything, and I told him about how I saw the Cloaked figure on the lawn with the top hat and creepy face, and he said to my father:

“From the sounds of it,  seems like it may have been a drifter or transient based on your description. Years of Alcohol and Drug abuse will do that to a person..unfortunately these types of crimes happen a lot in these small towns. Heartbreaking and awful it is.”

And with that he walked off to take care of some official business. I was just about to walk away when they opened up Brandon's garage, and what I saw caused me to freeze in place with fear and it felt like all the blood was draining from my body.

In the garage were all the things given to his father by the uncle for Halloween that year. Very creepy like Brandon said; European gargoyle-like statues, Taxidermied exotic animals and Jars of specimens, and even some antiquated looking paintings/books.  But in the far back was the thing that I will never forget. Sitting in the dim lit corner, propped up against the wall was a large lifelike effigy of a person or something trying to look like one, wearing a black stovepipe hat and a long black coat. It’s head was turned to the side, and the face was barely human, staring at me with a gaunt white face, and two coal black eyes…

It’s been years since that incident. The town looks different, people moved away, and the story of what happened has changed so much that it's now just a tale that kids talk about to scare their friends. I don't celebrate Halloween anymore myself, and I let my wife take the kids out for trick-or-treating while I stay home to keep watch on the house and refill the candy bowl every now and then. That is the extent of my holiday celebration these days. The memory of what happened has never left me, and I still have nightmares now and then, where that thing just stares at me grinning...and I wake up gasping for air, unable to speak or make a sound. I guess that’s why no one ever heard anything that night it happened, and why it was able to do the terrible things it did in complete silence. No one knows what ever became of it, as all the things taken from the house were moved around again and again, but every so often, I swear I can see a shadow out of the corner of my eyes.

And that’s the part that scares me. It’s still out there...and it KNOWS I saw it...